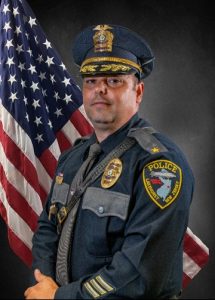 Chief Kline was sworn in as Police Chief on January 1, 2020.  Chief Kline started his law enforcement career with the Lakehurst Borough Police Department in March of 2004 and advanced through the ranks. He attended the Ocean County Police Academy and after graduation he was assigned to patrol duties. He has served as the departments DARE officer instructing the DARE program to the students at Lakehurst Elementary School. During his time with the Lakehurst Police Department Chief Kline worked in numerous capacities such as the ABC Officer, Narcotics Officer, Juvenile Officer, Field Training Officer, Evidence Custodian, Firearms Instructor and Range Master, Internal Affairs Sergeant and Squad Commander. In 2015 Chief Kline was awarded the Officer of the Year award.

Chief Kline is married with 2 children and resides in Manchester Township.